Posted on October 19 2012
by dirtyoldman 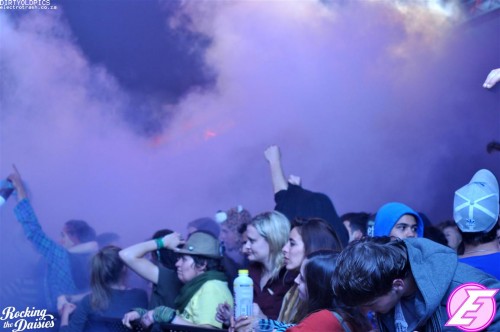 Rocking the Daisies, South Africa’s greenest and cleanest festival, has come and gone, but the memories (if slightly fuzzy) remain. We know what we like here at electrotrash, and it can’t be found at the mainstage. We prefer drum machines and synths and so naturally we gravitated towards the Red Bull electro tent, while making a few passes at the New World Beat Barn and the Mainstay Beach Bar. The electro tent, which from the outside resembled a Great White with its jaws wide open drew massive crowds, a telling sign when the quality of music entices a mainly rock oriented crowd. With 17000 people in attendance, this was the biggest Daisies yet, but apart from a slight traffic jam on the way out the organisers ensured a trouble free festival. Props!

Now before we get into the sets we loved, there were a few we sadly missed. A late arrival on Friday meant we missed Rebel Clef, Ol’tak and Soulo Starr outright. Dammit. Their sets are always a great build up to a crazy evening. New kids on the block, Christian Tiger School, were hot shit apparently, but the Hudsons burger I was chowing at the time was pretty good too. 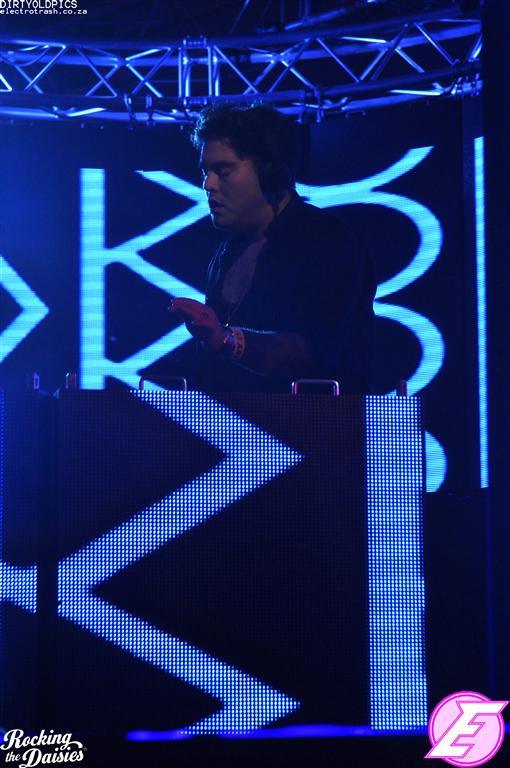 As the sun began to drop on Friday evening, JakobSnake filled the tent with his eclectic selection of rump shakers, while Anthea Duce made video magic, rocking the visuals. Next up was Leighton Moody, his set living up to his name. Deep and moody (heh), kids were getting down. Is that bumping and grinding I see front left? 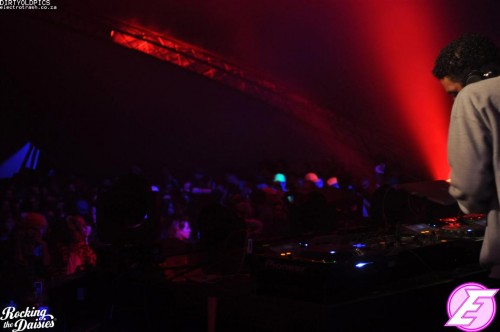 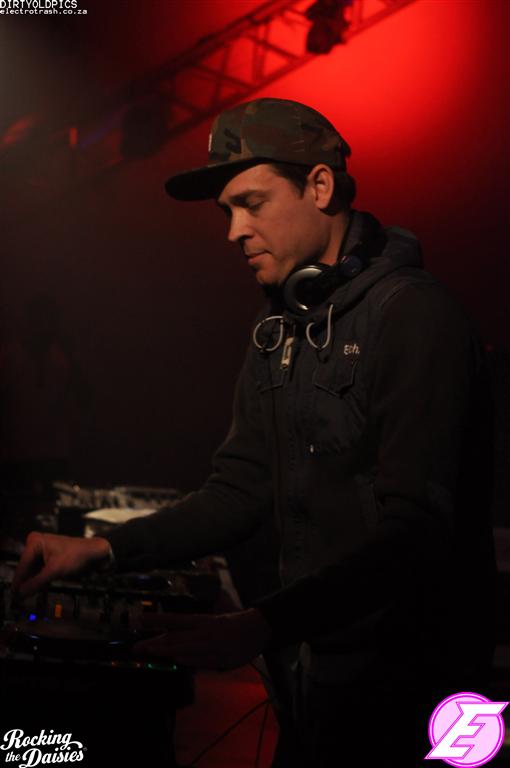 Terrence Pearce kept the house moving, with his signature blend of deep, yet slightly uplifting house, dropping a few of his own productions during his set, which the kids seemed to eat up. Things got a bit fuzzy after that, thanks to a character straight out of a Hunter S. Thompson novel, complete with Safari hat, puffy, sleeveless jacket, patterned tights and a dropper bottle of what can only be described as liquid disorientation. The next hour was spent sitting backstage, listening to some deep techno courtesty of Bruno Morphet, all the while watching him shaking his booty with a dance reminiscent of A Night at the Roxbury. 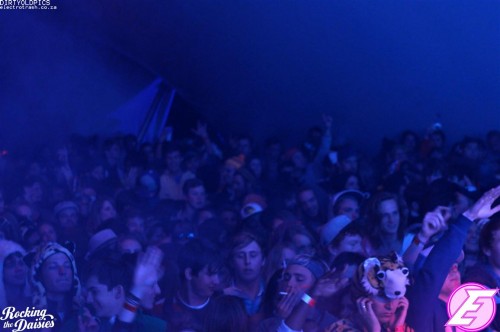 Black Motion are completely new to us and wow, what a pleasant surprise! Live percussion and and a very busy DJ hyped the crowd up and by the time Grandmaster Flash came on they were already in a frenzy. Ah yes, the Grand Master. He played, what can be euphemistically described, as a controversial set. For those of us that loved his work with the Furious Five and his contribution to Hip Hop in general, heart break and disbelief were the order of the day. For the 5000+ kids crammed into the tent it was “fucking kief bru! He open with Avicii and it only got better from there!” Different strokes… 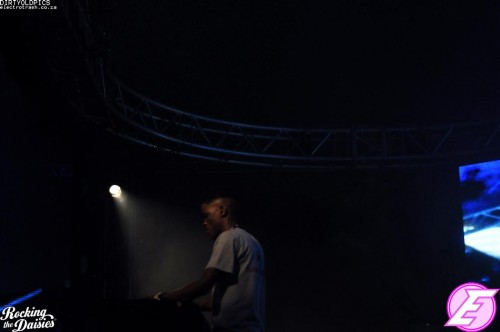 Koan Sound however impressed, 2 kids (both are 19) dropping heavy dubstep, without it sounding like robots fucking. Intricate drum programming, fluid fills and thick basslines, this is to dubstep what doom is to metal. As bed time approached for dirty, old men, Das Kapital took the stage. Always a crowd favourite, his set must’ve destroyed a few brain cells. 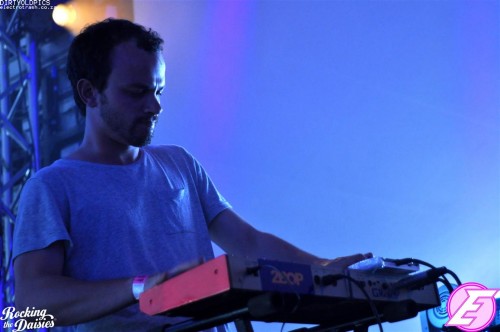 Saturday afternoon and Card on Spokes is playing to a crowd a bit smaller than he deserves. Playing favourites off his album as well as new tracks from his upcoming release, all live mind you, this guy encompasses what a musician is and truly deserves more recognition. Other notable sets included Blotchy, Floyd Lavine, Rudeone, Twelv & Thesis and Fletcher, the latter having to cover for DJ Yoda, as he tried to revive his dead laptop (I thought Macs don’t crash?). Sadly DJ Yoda couldn’t get his system running again, even after more than 2 hours of trying. At this point I was ready to call it a night, being somewhat disappointed with the internations, but in a moment of brilliant forethought, decided to pack up my shit and head back to the city. As a result I missed the amazing cool down sets on sunday morning, but at least I woke up on sunday well rested and clean. 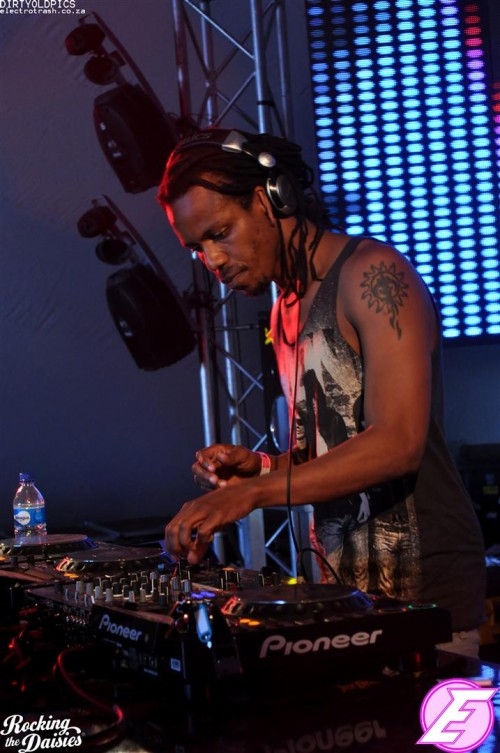 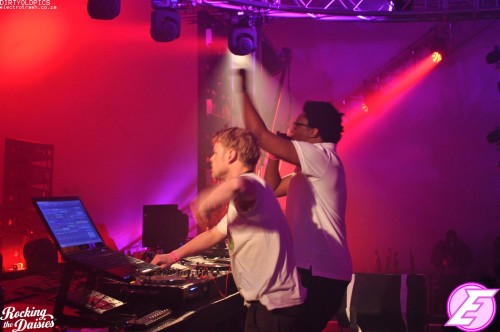 All in all, Rocking the Daisies was a great experience. While the internationals were slightly disappointing (no comment on Bloc Party, wasn’t there) one can’t really fault the organisers. Despite record numbers, things ran smoothly, although it seemed the food vendors underestimated demand resulting in the shwarma stand running out of Pita. Gotta love first world problems! Now in it’s 7th year, Rocking the Daisies is set to become a firm favourite on the festival calendar.

Their efforts to keep the festival green, which included rewarding you with free beer in return for a cup full of stompies was ingenious. Awareness of green issues were also spread through the Walking and Cycling the Daisies, as well as a designated area where more information on greening could be found. Check out the video below to see what I mean.

Produce Your Own #5GumExperience Remix For A Chance To Meet A-trak
New Witchboy tracks and album!