EVERYTHING YOU NEED TO KNOW ABOUT 49M ROCKING THE DAISIES 2012

Posted on October 3 2012
by dirtyoldman 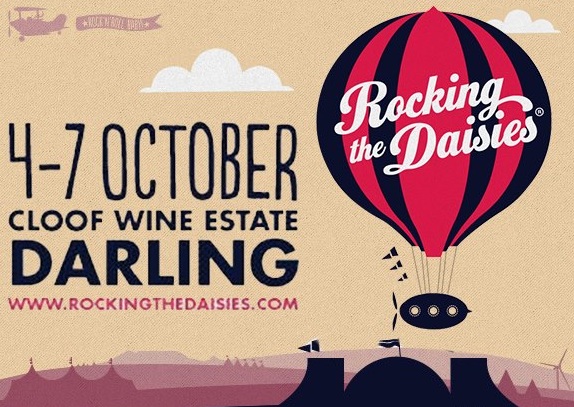 Rocking the Daisies is proud to announce that 49M have acquired naming rights for SA’s greenest annual concert Rocking The Daisies. The festival will now be known as the 49M Rocking The Daisies.
The 7th edition of 49M Rocking the Daisies is nearly upon us. Each year there are changes, new additions and farewells, but one thing is for sure it only gets better and this year is going to be EPIC!
The most notable change is that we will be opening the camping area on Thursday evening for all those keen party animals looking to get a head start on the good times. Stage schedules have changed with an earlier start on Friday and an earlier close on Sunday.

Ensuring that 49M Rocking the Daisies is a music festival for the champions,
Black Label is back again this year providing us with ice-cold beers from the Black
Label bar in the Main Stage arena, and reminding us why Darling changed its name
to Carling for the weekend. Expect some really awesome champion-themed
activation’s again this year. Catch the best of local up-and-coming bands
blasting open the festival on 04 October, Thursday night at the Black Label
Campsite Stage.

Red Bull is back to rock the Electro Tent till the wee hours of the morning for
all those festival-goers with the stamina to party through the night. Expect mind-
bending electro beats, outstanding sets and dynamic lighting with a world-class line-
up brought to you by Red Bull in conjunction with 49M Rocking the Daisies.

Making sure we are all cutting edge and super trendy in the footwear department,
Converse is here to keep us kitted out! Keeping the Main Stage artists happy

back stage, selling shoes and doing some awesomely original activations in the
campsite – be sure to sport your Cons all weekend long. Come and be creative and
show us how you would creatively kit out your pair of Cons, and then win the chance
to do so!

Buckle up and start prepping your tequila face because for the first time ever,
Cactus Jack will be at 49M Rocking the Daisies! Catch Cactus at the Cactus Jack
Nu World Beat Barn! That’s right; foot-stomping, heart-pumping, crazy dancing,
musical madness, all under one roof. So don’t be shy, grab a shot of Cactus Jack
Flavoured Tequila and come and watch your favourite Nu World acts; rebellious by
nature, you’re sure to let all inhibitions run free. Each year, this stage has become a
fast favourite at 49M RTD and will once again, be situated in the barn. With a
fantastical line up ready to raise a glass two, we will be showcasing acts ranging
from the wicked and wild Zaki Ibrahim, to Swing-Tastic favourites, Rumspringer.

Jagermeister is a brand that has been closely aligned with some of the best rock
festivals around the world and this year, Jagermeister will be rocking 49M Daisies in
a way that only Jagermeister can!

The impressive Jager truck will be on-site in the Main Stage Arena, serving ice-
cold Jagermeister shots to you all day and all night long. Take those shots up with
you to the awesome Jagermeister Rock Lounge Viewing deck, a custom-built
viewing deck with the best view on site, above the front-of-house desk, directly
overlooking Main Stage. Expect comfy couches, a cool ambiance and space to
max out whilst watching your ultimate rock legends on the 49M Daisies Main Stage.
Also watch out a once in a lifetime chance to be whisked off to a secret spot, literally
on the 49M Daises Main Stage, courtesy of Jagermeister!

Mainstay is back again this year to bring you the famous Mainstay Beach Bar!
Following the fantastic success of the coolest place to be all festival long – The
Mainstay Beach Bar will be bigger and better in every way. Expect icy-cold
Mainstay cocktails being served from late morning till sunset and jamming
tunes on the Mainstay Beach Bar Stage featuring artists such as Dean Fuel, Coco

Loco and many more – playing some seriously awesome beats. Look out for plenty of
sand, plenty of shade, loads of chill areas, and of course, the Mainstay Beach Bar
situated right next to the Cloof dam.

Like comedy? Who doesn’t… whilst the festival itself is full of comedic sights, we
have rounded up the professionals to bring you one rip-roaring, side-holding show
full of laughs. Savanna sure does like comedy and that’s why they are bringing us
some of the wittiest performances from all corners of SA in one awesome
venue – the Savanna Lemon Tree Theatre. Chill out in the comfort of the lemon-
themed theatre, crack open a Savanna and relax whilst laughing your head off! The
awesome guys from Savanna will make sure that your cups runneth over with
delicious Savanna cider – the dry and lite varieties, all festival long. Don’t fret; there
will be a dedicated Savanna bar right next to the Black Label bar.

Bursting with flavour and overflowing with all things Shnit, this year Pringles will be
making sure that you are fully-stocked with snacks whilst watching world-
class short films in the Pringles Shnit Cinema. Featuring in only a few select
cities around the world, SHNIT Cape Town is the only festival in Africa and 49M RTD
is proud to bring this cinema to the festival for the second year running. Last year,
the festival was greeted with great success and acclaim, a welcome break from the
outside madness of the festival. This year, expect it to be bigger, better and bursting
madness, fun and flavour thanks to Pringles.You will be able to buy your favourite
snack all around the festival and make sure you’re munching on them while getting
your cinema fix throughout the weekend.