CONVERSE PRESENTS: LET’S TAKE IT OUTSIDE 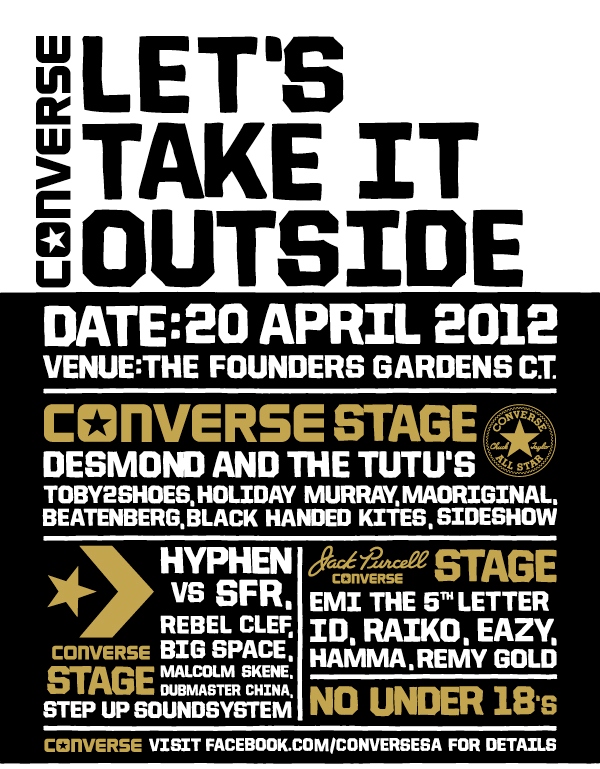 Just ‘cos its winter doesn’t mean you have to stay indoors. Let’s Take it Outside or better yet, Let’s Party Outside, Converse-style!

Think three stages featuring Hip-hop, Indie Rock and Drum n Bass, 23 bands and DJ’s – all wrapped up into one night of awesomeness taking place in The Founders Gardens Cape Town on Friday 20 April.

Converse fans can look forward to rocking to some of SA’s most popular acts on three Converse Stages: Desmond And The Tutu’s, Hyphen vs SFR, Maoriginal, Toby2Shoes, Rebel Clef and Eazy will be joined by the likes of Holiday Murray, Big Space, Remy Gold and more.

3500 free tickets for this Let’s Take It Outside Party were snapped up on the Converse Facebook Page in less than 5 days!  Converse is working on releasing more tickets on their Facebook Page for all those that missed out.

Keep a daily eye on the Converse Facebook page for info on the release of additional tickets www.facebook.com/ConverseSA.

The Founders is located behind the Artscape Theatre on the corner of Jan Smuts and Table Bay Boulevard.  Doors open at 8pm on Friday, 20 April.