Posted on October 26 2011
by dirtyoldman 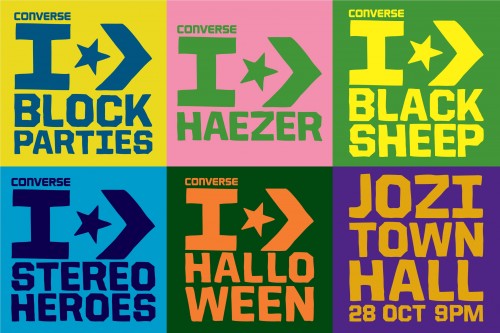 Halloween 2011 is here and this time it’s bigger than ever! CONVERSE is taking over Newtown Johannesburg and throwing one massive dress up Halloween Block Party!!!  Our headliners are well known slayers of the dance floor, STEREOHEROES (FRANCE) along with our very own godfather of electro, HAEZER. They will be joined by Sibot, Dj Kenzhero, Niskerone, Bittereinder, Mr Sakitumi, Desmond & The Tutus, BTeam and more!

The Halloween Block Party will have 4 stages featuring over 20 acts, insane prizes, live MC battles and more… This is Halloween everyone, so get your freak on and get creative with your costumes. There will be prizes for best-dressed boy and best-dressed girl!

Plus the new fully customised 12m long I*> WHEELS truck will also be joining the party with its fully customised entertainment area including a mobile concept store inside the truck!  I*> WHEELS will be hitting a neighbourhood near you from the 13th of October. Make sure to find it, get in it, shoot some hoops, score some goals, win some prizes and stand a chance to get free tickets to the Block Party in Newtown.

The I*> WHEELS truck is currently in JHB  – it moves to Durban in November before hitting the Cape from the beginning of December with lots of parties leading up to the MASSIVE CAPE TOWN BLOCK PARTY AT THE ASSEMBLY ON 15 DECEMBER!

Go to FACEBOOK.COM/CONVERSESA and stand to win 1000 double tickets to the Halloween Block Party.  After that its R100 at the door.