Posted on October 18 2011
by dirtyoldman 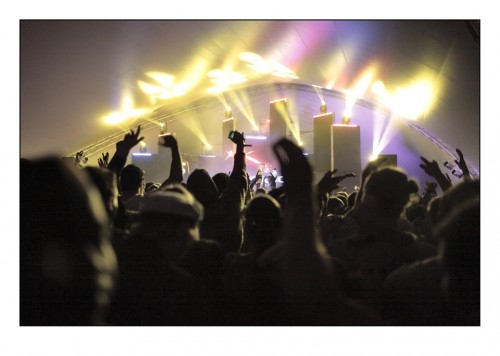 A week has passed and the cold that I picked up the day after Rocking the Daisies is finally getting better. Maybe it was the intense heat or the lack of sleep, but something got to my immune system. Was it worth it? Well yes and no. Let me put it into perspective for you. There are two ways of experiencing a festival. Either you try and catch a bit of everything and run between the stages like a speed freak or you find the stage that best suits your musical interests and stay there. I ignored the third option, forget about the music and get as trashed as possible, as it is irrelevant to the point i’m trying to make. But let’s take this narrative to the beginning.

I arrived in Darling around 2am on Saturday morning, just in time to grab my VIP band although I would have to pick up my media tag in the morning, as the people responsible for those had already gone to bed. My plan  was to arrive late Friday afternoon, but due to  “enormous media interest in covering the Festival” my photographer/driver did not recieve accreditation and I had to organise last minute transport. Fine.

2am isn’t the greatest time to arrive at a party, because you either end up getting really fucked up playing catch up with all the wasted kids, or said kids irritate you to the extent that you seek out a quite place. Being a wise, old soul I settled on the middle-ground. This involved the consumption of moderate amounts of whatever was being passed around at the time. Which narcotics ultimately ended up in my system is irrelevant, as in the end they all lead to insomnia and bruxism. Great.

Having looked at the line-up I decided to stick to what I know and live in what some witty reveller had dubbed the Rave Cave. The Red Bull Tent was simply amazing. A massive stage with LED displays looking like the New York skyline dominated the peanut shaped tent, which was packed all the way to the back when I arrived. The headbanging kids and the heavily distorted thrashing electro told me Haezer was doing his thing. Feeling slightly claustrophobic I moved backstage to catch the action from slightly less frenzied surroundings.  I say slightly less, because there wasn’t much resprise from the madness there either. An endless supply of Red Bull tends to get people going I guess. I moved to the other side of the fence to catch some of the visual magic created by Pixel Surgeon which accompanied Moe Joe’s set and was glad I did.

With insomnia haven taken a firm hold and the music having been shut off at 5am exactly, I spent the next few hours talking about life, music and meaning in what must have been an intensely profound and a heavily philosophical discussion. The lack of sleep and intense heat on Saturday meant I spent the entire daytime floating around in a semi-concious state, cursing the chemists. Thank god for music. While most people spent the day at the dam in the sun, the Party Peanut saw some of South Africa’s finest lay down everything from dubstep to electro-house. Between the dubbed-out sounds of 7ft Soundsystem and the psy influenced dubstep of Indiginous, I started to feel something, something good. Mr. Sakitumi and the GRRRL were next and never cease to impress. By the time Jakob Snake and Richard the Third came on I was ready to party and so were a handful of other kids, the rest still dancing to house in and around the dam. Blush n Bass took the nostalgia factor to the next level, dropping some Fischerspooner, Felix da Houscat and Soulwax. dirtyoldman was all smiles. Struggling to get a reaction, although playing an impressive set, Yesterday’s Pupil seemed to embody the cliche that Cape Town kids only dance to what they know. Really?

Danielsun deserves an article all of his own. The man is a suave WDA (well dressed African) with moves for days. Tommy Gun won’t play a set without him and I can see why. The man is like a dancing Hype-Man. Dancing from the first beat of the set till the last, Danielsun adds energy and an element of performance to the DJ set of Tommy Gun. The Ruffest, arriving fashionably late, did their thing and I got something to eat. I knew they would put on amazing show, which I wanted to catch, but my stomach won. When I got back Audiophile 021 had just started playing and the sun was almost gone. This meant that the Dubstep Dome was once again filling up. After blowing a few minds, thanks to some of the hardest drops found in dubstep he made way for SFR vs Hyphen. Being tasked to kick it up a notch after an Audiophile 021 set is no easy matter, but the boys took it in their stride.

No one was prepared for the mayhem that would ensue next. PH Fat opened their set by flooding the crowd with blow up dolls, guitars, ponies and a bunch of other shit the was inflated backstage by everyone except the PH Fat crew. It only took about five minutes before a heavily muscled kid, probably freaking out on roids, threw himself onto stage and got booted by Mike in the process. This happened a few more times during the show and each time was more comical than the next. By the third time security had had enough and chased him on stage and tripped him as he tried to run away. I use the term security lightly here, because when some huge drunk guy muscled his way backstage and tried to convince us to tell PH Fat to play the Nigerian national anthem (since they run the whole festival), it became quite apparent that they were simply unemployed guys from Darling in yellow bibs that struggled with basic access control. Not that I’m complaining, since this arrangement meant you could bring anyone backstage if you walked with enough authority. The mayhem continued through Sibot’s set, which featured amazing live visuals cut between shots of him playing live. This aspect of his performance is greatly under appreciated. Next time check out his synth-scratching and finger drumming to see what I’m talking about here.

With the start of Killer Robot, the anticipation in the Techno Teepee began to grow. Whispers of Kevin Saunderson were going around, a pioneer of Techno. There was talk of that Detroit sound, his sound. Pioneers may discover new territories, but it is the generations after them that introduce progression. Kevin Saunderson was like that, if you wanted Detroit techno you would have been ecstatic. I like Berlin. Anthea Scholtz was class from start to finish and Digital Rockit, in their Tron-esque outfits were astounding, but an hour into their set I decided it was time to grab some much needed sleep.

Sunday was like a trip back in time. Fletcher. Markus Wormstorm. Felix Laband. Some Bushman’s ecstacsy was being smoked and their sets flowed into one. By the time Felix came on, even the most hung over kids managed to drag themselves to the come-down camp and catch a rare and beautiful performance by a local pioneer. Phat Jack came on and I realised my lift home was either passed out somewhere or at home. Time to make a plan.

Rocking the Daisies was great. Let me rephrase that. The Red Bull Tent was great, I have no idea how Rocking the Daisies was. I heard it was an green fest, but when I left I saw just as much trash lying around as at any other festival. I heard not even artists got tickets for their partners. It also looked like everyone had a good time and my tent, despite not being able to zip shit, was not messed with, so I guess the final verdict would be good effort with room for improvement. Having spent the last decade in Gauteng and thus being spoiled by the mammoth that is OppiKoppi it is understandable that I am a bit biased. Will I go next year? You bet, if only to see if they have improved on this year. Rocking the Daisies is a festival that has a lot of potential and I am eager to see it grow!