Spoek Mathambo at the Electron Festival in Geneva 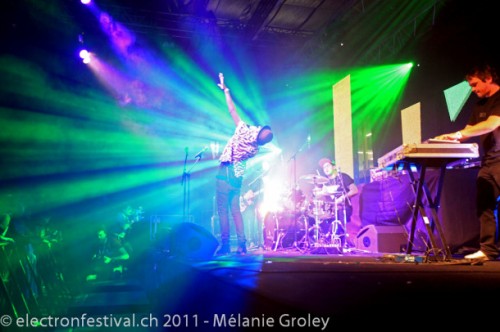 Richard The Third went on a European tour with Spoek. Check out what happened in Geneva:

It was only once we were on the road that I began to realise that our gig at the Electron Festival in Geneva was going to be something momentous, whichever way it worked out. I hadn’t actually looked at the festival line-up but upon seeing we were sharing a stage with such big-wig electronica acts as Modeselektor and prolific DJs such as Diplo, I began to understand that this was surely a step up for us, a marked point in our progression. There is after all such a big difference between playing on a cluttered stage in a smokey nightclub with the manic faces of inebriated revellers obscured by steamy perspiration and a big stadium stage.

The first night we spent perusing the festival, spread out over 4 venues situated around Geneva. The Red Bull Music Academy Stage was on form presenting an array of interesting acts including the turntable, turn-the-party-out antics of Cut Chemist, the broken toy-box downtempo of Luke Vibert and most excitingly for Jake and I, being lovers of techno, Juan Atkins who one can confidently say is pretty much the grandfather and godfather of electronic dance music.

Giddy nerves began to set in when we entered the main stage of the festival, south of town inside what is usually a large ice-rink, where we were set to play the following night. Loefah and Mc Chunky were bashing out the new sounds of UK bass music to what must have been about 1500 festival goers and were followed by Modeselektor whose pedigree mix of the best elements of dubstep, techno and everything in between, ignited a sonic orgy. The idea in our mind that we would have to provide the same level of entertainment as these giants was a fine balance of excitement and anxiety.

The rest of the night was a blur of bass, beats and booze as we traversed the dancefloors of the city. Spoek made a cameo on stage with long-time collaborators Schlachthofbronx, who did a fine job of bringing the house down, and we were kidnapped by Loefah and Mc Chunky who mistook us for Australians who wanted to leave the party too early.

The following day, after a lengthy sound-check, a radio interview, and some vital downtime, we were ready to get our festivities on. We arrived early to catch the beautiful Ngoc Lan on the RBMA stage and then headed off to the main stage, shitting bricks but amped to play the show. Our enthusiasm was dashed against the rocks when we arrived to a mostly empty venue and although it was reasoned that it was too early for a rocking crowd we were nevertheless bummed out. By the time we went on stage a sizable amount of people had come and our mood improved.

The thing about our set is that, although we have been playing together for a long time now, and although we work very hard on the music, when we perform it always feels like there is this little loose thread ready to be pulled. And the more its pulled the more we come undone and unable to salvage a show. But if we just avoid that thread altogether, focus all our energy on keeping things tightly knit, then our show really hits hard. In any case the combination of nervous energy, focus and a decently sized main set crowd, meant that we had one of those hard-hitting shows and said thread was never pulled. From the stage it sounded great and judging from what we heard from the other acts, we gather that it must have sounded pretty amazing out there as well.

The rest of the night was somewhat of a blur, with our post-gig celebrations taking precedence over sobriety. But things really felt solid and judging by feedback this will be one of many festival gigs.