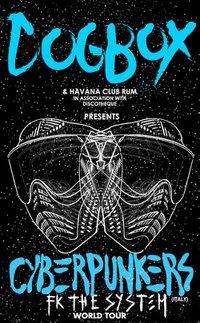 The “Cyberpunkers” project is the child, born in 2006, of the passion for Cyberpunk culture of two young Italian DJ’s. The format aims at giving a fresh start to this style through four different yet connected forms of art: electronic music, fashion, design and photography. In a nutshell, a transposition of the Cyberpunk world in modern clubbing Through several performances at famous clubs, “Cyberpunkers” drew lots of interest and ended up being much taked about for both their original look, made of masks behind which their true identity is hidden, and for the originality of their shows, which are marked out by the use of two consoles at once and powered by several audio machines. Cyberpunkers shared the stage of the biggest electronic European festivals with such worldwide stars. Such a tight schedule did not prevent them from doing a lot of important remixes and singles.

Young Blood is a new DJ movement founded by GRIET!!!….see what it is is a dance floor that only showcases new up and coming Dj’s with potential!!!!

Spoek Mathambo at the Electron Festival in Geneva
Free Tickets to Cyberpunkers @ Assembly!!!