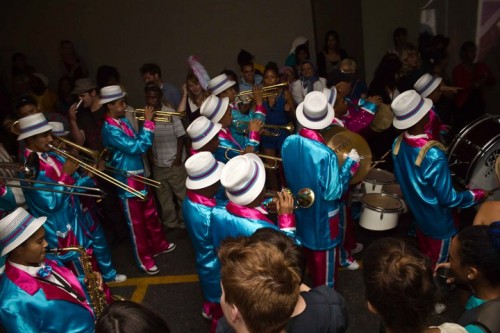 The i art sa community mural project, a collaboration between A Word Of Art and Adidas Originals, has, if anything, shifted the focus of Cape Town’s creative scene from the protected frame of the art-fag clique to Woodstock as a whole, a suburb that is incredibly diverse in terms of its social fabric. A mixture of poor, yet strongly community active (and many cases Muslim) Cape Coloureds and a smattering of arty lefties, the project’s ambitions are high and even a little hazy but certainly in the right direction. So when Ricky Lee Gordon, the main man behind Word Of Art, approached the Red Bull Studio to curate the music for the photo exhibition of the project, I jumped at the idea of working on music that aspired to involve the community.

This came in the form of working with a Woodstock hustler and community figure, Rashid, who took on the responsibility of connecting the Woodstock community with the collaborating artists for the original project. He suggested working with two musicians: Quinton Lewis, a seasoned crooner and Kaapse Klopse veteran, and Chris Punda a young Malawian immigrant with a passion to create fresh urban sounds and a wealth of traditional Malawian Manganje songs filed in his musical mind.

Over the course of the week the three of us experimented in finding a sound that we would all be happy with. This also involved working with a group of 12 or so Woodstock kids who, in all honesty, were an exhausting handful but a pleasure to share time with in the studio. In the end the music we came up with was far from ready to be performed live but a valiant attempt.

The actual party was great nevertheless, in many ways due to the other acts. Blotchy and Nonku debuted their deep dubstepping sound overlaid by sultry vocals, Voicetag performed their increasingly super-tight electro-rap-jazz show and Thibo Tazz got a dancefloor going for the early morn. There was even an appearance from the Fabulous Woodstock Starlights, a hard-working well reputed Kaapse Klopse outfit. The actual collaboration between Quinton, Chris and the kids went better than I expected. It was loose and a little shaky but something unique and special. In the end we were able to complete three songs in the studio.

“Waar Is My Meisie” is a combination of Kaapse Klopse crooning Malawian singing and drum n bass resulting in a one of a kind production.

Lastly “Ali Bama” is a classic Klaapse Klopse tune with a guest performance from the kids of Woodstock underpinned subtle downbeat electronica additions.

In the end the project shows incredible promise in terms of future endeavours. Already the music created is something that is ambitiously collaborative.

Battle Beyond The Stars – The Desert
Audiophile remixes the Glitch Mob, 187 Lockdown & Timbaland!?