Posted on November 17 2009
by dirtyoldman 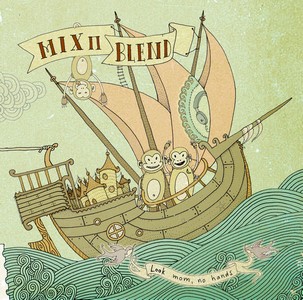 The album is, as they say, genre busting (ok so I got that from the press release). Mix n Blend, err, mix and blend breaks, deep dubstep basslines and a hint of hip hop with some funk, a touch of soul and various synthesised sounds in order to bring you a sound that is very much their own and recognisable. Even though the album is a mix of different sounds and influences it blends together rather well, forming a coherent entity that is a joy to listen to (see what I did there?)!

Read the rest of the review, download Shall We Swing and stream their whole album after the jump.Being part of the African Dope stable, Mix n Blend have been lucky enough to collaborate with a number of great artists such as Fletcher, P.H. Fat, Bakaman & Farrell Adams to name but a few. It is in fact easier to name the tracks that don’t feature one or two artists that the other way round! In case you were wondering they are: Bass Niddies (a bass-heavy album opener that is a short teaser that serves to introduce you to the upcoming sonic goodness, The drum roll on the kick is reminiscent of the one in Super evil but that is where the similarity ends), Morphed Code (Cape Town glitch at its best), Sik Wid It (another glitch track, this time featuring a sick deep-ass synth) & Full Ahead (an epic Drum ‘n Bass track that is sure to get you bouncing and loving trumpets).

P.H. Fat on Spring Step drops some ill rhymes over a glitched out beat, while Pedro from 340ml lends his smooth vocals to the reggae infused Sunday Afternoon Dub. Farrell Adams, with his i-wanna-get-nasty voice, is featured on two tracks, the bouncy ragga track Lazy Friday Sounds along with Rude Bobo Boss and on the funky Out of Line. First Light featuring Rayelle can only be described as a powerful ambient track that features massive pads and chirpy synths that accent it beautifully. Tantrum featuring SFR and EJ Von Lyrik from Godessa is somewhere between ragga, drum ‘n bass and hip hop, with a full on bass assault! EJ Von Lyrik is also featured on Champion Sound alongside Bakaman. This one features a deep dubstep-like bassline over crazy breaks and mad flows. Crosby on Out of Town brings the ragga voice to a deep bassline and broken beats, with some reggae guitars along for the ride. What starts out as an acoustic piece featuring Sian and Saucetone, Drug in a Mug turns into a very relaxed glitchy track that is beautiful but still retains that Mix n Blend edge. My personal favourite has got to be the up tempo, big band swing track Shall we Swing which features Fletcher and Sindy. Driven by snappy keys, swingin’ drums and sexy female vocals, the deep squelchy synthesised sounds are a nice touch that take a dancefloor filler and make it even harder to resist its pull.

Mix n Blend have really put something special together with this album. It is clean and professional in composition and great fun to listen to. They boys from Cape Town have resisted the urge to follow a single formula for their tracks which allows for some great variety in terms of genre, yet have maintained a sound that is definitely their own. Decide for yourself by streaming the album below and then buy a copy! I guarantee you won’t be disappointed. Also grab two tracks below in order to have something for your iPod until you get your copy.