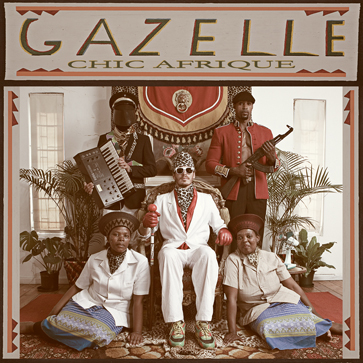 Currently rapping up their tour of Europe, Gazelle is bound to stir things up both nationally and around the world. Consisting of Xander Ferreira and Nick Matthews, Gazelle are uniquely South African and yet strangely familiar. CHic AFrique is both a product of Xander’s rural Limpopo upbringing and a range of influence including 1970s Nigerian Disco Funk, ragga and electro pop. Mixed together this forms what they calls ‘Limpop’.

The sounds of rural Limpopo and traditional South Africa feature on tracks such as the opening track ‘Barbarella’, ‘Neondebele’, the end of ‘Die Verlore Seun’ and the playful song ‘Try’. His ragga roots can be found in tracks such as bouncy ‘Chic Afrique’ from which the album draws its name, the slightly darker, deep and bassy ‘Just Now’ which features Weez and the above ‘Neondebele’. Songs such as ‘Options’, ‘She Did Me In’, ‘Strange Things’ and ‘Golden Sun’ lean towards disco funk and electro pop, creating catchy bass vibes along with fun synthy melodies.

It is refreshing and apparent that Gazelle do not take themselves too seriously. This is evident not only in Cold-War era African Dictator get-up worn by Xander but also in tracks such as the semi-autobiographical ‘Die Verlore Seun’, which talks of a boy leaving his home farm for the lights of the disco found in the big city and in the hidden track at the end which I shall dub ‘Die Durban se Jaarlikse Poepwedstryd’ which, as the name implies, covers a (fictional I hope!) annual farting competition.

The album covers a variety of sounds, yet remains a coherent entity thanks to the unmistakable lazy voice and song writing found on the record. The album will be available in Musica and Look & Listen soon, along with a number of your favourite independent record stores nation wide. I recommend you grab a copy of what I suspect is one of South Africa’s most underrated groups.

Check the Downloads Section for a taste of their music and just because I know you guys love it so much, grab Die Verlore Seun below. This is a promotional download only available until Saturday!

Last reply was August 19, 2009
Felix Da Housecat – We All Wanna Be Prince (Lapse Discomix)
Grave Danger Drop Off Some Remixes!