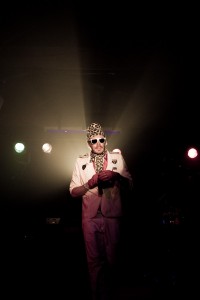 There is more to Africa than Safari and Civil War…..
We got dance music….
It is where dance music began anyway….

Gazelle is a small but colorful part of the African Renaissance promoting the growth and world view of any African born art. Apart from a fresh mixture of sound, a strong visual performance involving various artists and dancers makes it a very entertaining theatrical show. Combining influences from funk, reggae, disco, 80′s electropop and traditional African melody, the sound comes alive in a fresh genre.

The group was born in 2006 following a long journey of discovery in music. Xander Ferreira, the founding member, started his journey as a reggae singer known as the White Lion.

Originally from a remote part of South Africa, close the border of Mozambique, he grew up being a part of authentic South African culture in confusing but colorful times.

Gazelle had it’s breath of life when Xander started experimenting with producing electronic bedroom music. Mixing an element of Reggae Dub and Electro something fresh was found.
Recently he has joined forces with music producer and DJ Nick Matthews from bands like The Iridium Project and Coda. Together they combine an interesting mixture of backgrounds to create the unique sound of Gazelle.

At the moment the act is planting a seed in the music scene in Cape Town, waiting for the roots to spread through Africa and the world.

The focus is to create authentic Afrikan Elektronik Dance Musik. Called LIMPOP, a genre derived from the province limpopo where Xander grew up.

So far he has performed in some of the best venues in:

He has also been featured in Rolling Stone Magazine Italy on an event in Rome that he performed for Rome Fashion Week. Where he got multiple publicity with MTV, Died Last Night and World Fashion TV.

With Xander’s previous project The White Lion he has collaborated with his cousin Hip Hop Star Weez to create an album that was recently signed by Fred Sherman’s record label “Latin Thug Records” in Los Angeles. Collaborating with artists such as B Real from Cypress Hill.

Grab some free music from Gazelle in our Downloads section!