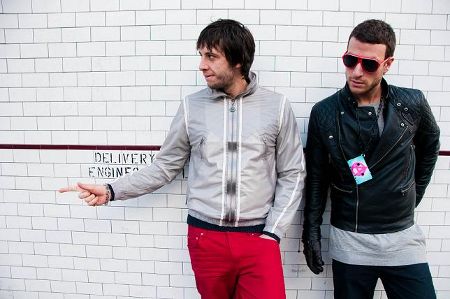 A kind man from Muzikology B.V. sent me this awesome pre-release. Dutch producer Don Diablo teams up with UK rapper Example for this one, set to be released soon (on 29 June 2009 I believe)! Here’s what the press release had to say:

Don Diablo and Example team up for their joint effort “Hooligans”, which is set to become the mosh pit anthem of 2009! On remix duties: Noisia, Spor, A1 Bassline, Doorly and the main man Don Diablo himself. Make sure you grab your copy of “Aerodynamic Hooligans” as well, which is a mash-up Don Diablo did of his Hooligans track with elements of Daft Punk’s “Aerodynamic” and yes, you know it will work like a MoFo on the floor! Release date: 29.06 (except Australia / North America / Mexico, release dates tbc). Check out the music video here: www.youtube.com/watch?v=OH78CezwPOQ.

The video is pretty rad, so give it a look! They also sent through links to download SEVEN different mixes of the track, one of which is a mash-up with Daft Punk‘s “Aerodynamic”. Grab them below! Grab some album art for the tracks over here!