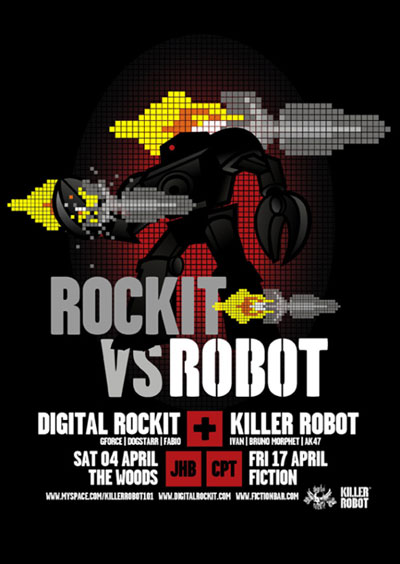 Killer Robot welcomes their upcountry disco ball toting cousins down to the mother city for a long awaited night of mayhem. Can the Robots stand up to the triple tag team of Fabio, Dogstarr and Graeme G Force?

DIGITAL ROCKIT
Digital Rockit, a DJ collective comprising Dogstarr, Fabio and JHB legend Graeme G-Force came into being 4 years ago through a common vision and interest in quality cutting edge music and events. In that time, the trio have distinguished themselves on every major platform for underground dance music in South Africa, as well as several abroad, with their unique approach to the art of djing, performing together simultaneously off three digital consoles. There is also a visual element to Digital Rockit performances, driven by the highly experienced G-Force, that adds a unique dimension to the act.

The 3 DJ’s involved have taken their sets to the next level by embracing advanced music technology. Live mixing of visuals, digital formats of music, EFX and live music edits are all on the cards for their performances. The music is eclectic yet dance floor friendly with each Dj’s personal style creeping in to a mix of the highest order. To classify the music as electro or tech house or electronica would not do it justice, it is all that and more!

DiGiTAL ROCKiT recently launched their new residency, ToyToy at Loaded in Joburg, and played host to DFA’s Tim Sweeney as well as Killer Robot at two successful parties. In addition to this, they found time time to complete their second free covermount mix CD for the SA youth culture magazine SL called Deviant Disco, the first being Dirty Dancing in July 2006.

Digital Rockit’s website www.digitalrockit.com contains more info on the individual members and Toy-Toy as well as a podcast/downloads that features recordings of performances and custom made mixes.