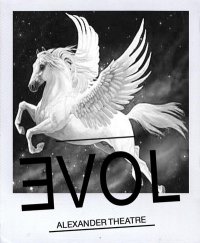 This idea was originally conceived a while back (after a substantial amount of liquor). What we originally thought was quite out of our depth, considering our home is a tiny dingy hole in the black heart of the mother city, we slowly started to bring all our resources together and developing the idea further.

So here it is EVOL is coming to JHB. The highly acclaimed band/live performing duo The Magic of Pegasus will be touring with us. Their performances and stage presence is something incredibly unique. See their interview in this months SL magazine, also available.

The venue for this event is one that has built up a reputation as the new hotspot. The Alexander Theatre will be transformed into a seismic 80s bop shebang.

For those of you who don’t know who or what evol is, peruse through the events column and see what we get up to. The club is in its sixth year, which speaks for itself. Our values have always been based on keeping the name and everything that surrounds it as underground and pure as possible. Expect anything from pre-punk, post punk, 80s pop,synth pop, funk,disco, electronic and some industrial gems. Our aim is to tweak our takkies as much as possible.

Spread the word –The word is DANCE–

To the Cape Town loyal, anyone looking to jump on the band wagon, we are going to do a bulk booking. This will reduce prices considerably. Or jump in a car, accommodation will be sorted out. More on this later.

See you all soon.