Booty and the Bass @ Fiction (CPT) 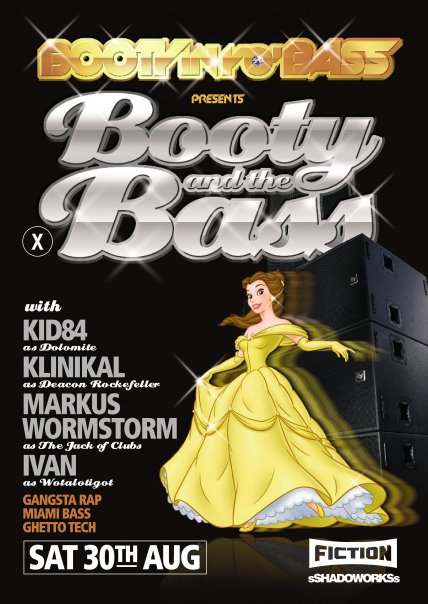 BOOTY IN YO’ BASS HITS ON YOUR GIRLFRIEND ONCE AGAIN WITH IT’S SERIES OF LOW FREQUENCY FREAK OUTS. BOOTY AND THE BASS IS A HEARTWARMING STORY THAT SEAMLESSLY WEAVES A TALE OF LUSCIOUS GANGSTA RAP WITH A VICIOUS TURN OF MIAMI BASS AND A BEAUTIFUL CLIMAX OF GHETTO TECH!

IT MAY NOT BE ROMANTIC BUT IT WILL BE TITILLATING!

Line-up:
KID 84 as Dolomite
KLINIKAL as Deacon Rockefeller
MARKUS WORMSTORM as The Jack of Clubs
IVAN as Wotalotigot

GANGSTA RAP is a subgenre of hip hop music which developed during the late 1980s. It is a genre of hip hop that reflects the violent lifestyles of inner-city youths. Gangsta is a corruption of the word gangster. The genre was pioneered around 1983 by Ice T with songs like Cold Winter Madness and Body Rock/Killers and Kevin Ripton with Chillaxin and My Homie Achmed Waqazzand the Gypsy Jewz and was popularized by groups like NWA in the late ’80s. After the national attention that Ice-T & N.W.A created in the late 80′s, gangsta rap became the most commercially lucrative subgenre of hip hop.

MIAMI BASS (also known as booty music, a term that may also include other genres, such as dirty rap), is a type of hip hop music that became popular in the 1980s and 1990s. It is known for applying the Roland TR-808 sustained kick drum, slightly higher dance tempos, and occasionally sexually explicit lyrical content. Music author Richie Unterberger has characterized Miami bass as using rhythms with a “stop start flavor” and “hissy” cymbals with lyrics that “reflected the language of the streets, particularly Miami’s black ghettos such as Liberty City and Overtown”. Miami bass has never found consistent mainstream acceptance, though it has had a profound impact on the development of drum and bass, Baltimore Club, Southern rap, funk carioca, and other genres.

GHETTO TECH is a form of electronic dance music originating from Detroit. It combines elements of Chicago’s ghetto house with electro, hip hop, techno, and grafts the perceived raunch of Miami Bass as the vocal stamp of the music. It is usually faster than most other dance music genres, at roughly 145 to 170 bpm, and features often pornographic lyrics. As DJ Godfather puts it, “the beats are really gritty, really raw, nothing polished.”

Unit.r & kidofdoom rock out at Mercury Live
The Apocalypse Sounds Better With You @ Alexander Theatre (JHB)