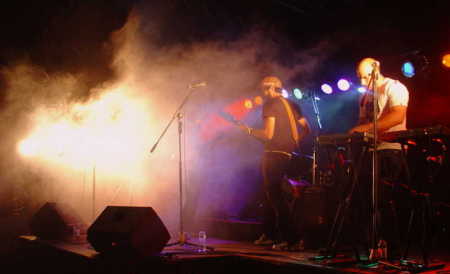 RickDisco says: So we have a new writer on board, so welcome to Jason D! He hit the last Unit.r launch party in Stellenbosch and although I took long to post it, he has the review below to say! There are also some pics from the show in our Gallery!

Friday saw the fifth and last leg promoting the release of Unit.r’s debut album, Phosphenes. In going with the (stereotypical) tradition of Stellenbosch, I’ll use just one word to cover the show…
Lekker.

Read the rest of the review after the jump!

Getting there early, as in two hours early, I had plenty of time to check the stream of fans, new and old alike, coming in. Because I’m so lekker and popular I knew about three people there. Stellenbosch seems to have a scene of it’s own, with hardly any of the nu-rave, indiesque peeps we see inside and around the City Bowl area of Cape Town. Honestly, the crowd was incredibly diverse. It looked as if every clique had sent diplomats. There were the walking tanks, teenie-boppers, those super hot prep girls and even a dude with a purple velvet jacket!

Unit.R hit the stage first, which I thought pretty damn arb seeing as it was their album launch. This was the first time that I got to watch Unit.R live and true to what RickDisco had told me, they’re crazier than a gang of Hells Angels at a Rolling Stone show. Each of the three vocalists has a unique voice that gels really well with the others. Lekker live shows are definitely a past time for these guys, with the atmosphere ranging from chilled out grooving to apeshit boogying.

Max Normal.TV took the stage to an almost painful amount of cheering. Damn, those Stellies kids love their Hip-Hop. Max Normal.TV seemed to get a much bigger (and crazier) response, although I’m gonna put it down to their extreme visuals (men. naked. slapping.) and the fact that they’ve released a ton of tracks for download.

The show ended pretty early, would have been sweet if Justin de Nobrega (Unit.R, Max Normal.TV) ended the night with some Considerate Builders Scheme tunes. Hey, you can’t blame me for being an optimist. Cape Town without doubt has the country by the balls when it comes to awesome music, crazy live shows and sweet venues.