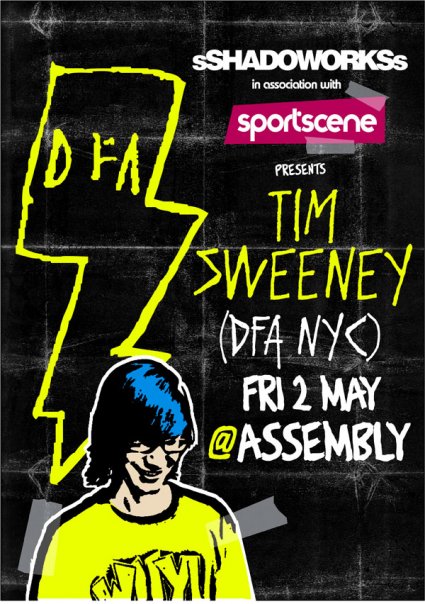 Where: The Assembly, 61 Harrington Street, CPT

Tim Sweeney moved to New York in 1999 to study Music Technology at New York University. He soon established a radio show on the university station WNYU that is still running and has a massive worldwide following via his beats in space website.

The show is know for having top notch guests on every week with artists as diverse as Carl Craig, Trevor Jackson and Michael Mayer to name but a few. Check out the podcasts!

Tim interned at Steinski’s studio which eventually led to Tim being the DJ for Double Dee & Steinski’s first ever live show in 2002 where they opened for DJ Shadow.

Tim then moved on to intern at the Plantain Studio with
Tim Goldsworthy (U.N.K.L.E / Mo Wax) and
James Murphy (LCD Soundsystem) who at the time where starting up DFA recordings

Tim’s work under the DFA label includes playing the sax on the DFA remix of Radio 4’s “Dance To The Underground” as well as mixing the DFA cover CD for Muzik Magazine in 2003 and doing the mix CD for the DFA compilation #2 with Tim Goldsworthy.

Since 2003 Tim has been working at Rockstar Games as their Soundtrack Supervisor, putting together the music for their games such as “Grand Theft Auto: San Andreas.”

He can also be found every Friday night DJing at Apt. in New York’s meatpacking district.