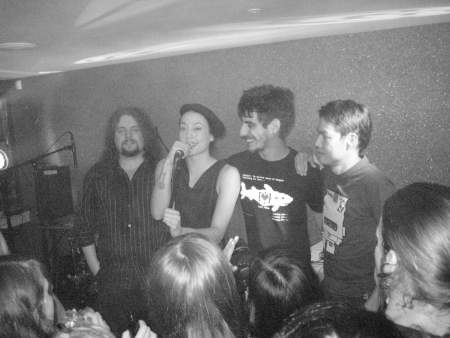 This past Friday I went through to The 88 Lounge in Norwood, JHB, for the last Lark for Larks final Gauteng performance ever. Arriving early to avoid the queues that I expected we got to witness the, to put it mildly, weird diversity of Larks fans. This really highlighted the impact that this Capetonian electro act has made on our music industry. The venue filled up slowly, but by the time the band was ready to play it was packed!

Review after the jump! Check out our Gallery for a few more photos!

The gig started off with a bang and a couple of my favourite songs off of their debut EP “Mouth Of Me”. All the Lark tracks that we know and love were played out with a great energy by the band. A new track was played with Inge mentioning that we will be hearing the song again, in a different way, soon. We will certainly keep our ears open for this.
Their final track – before the encore – was an acoustic version of Half Eaten which was pretty damn good and really different. The show ended with an emotional looking band playing a final encore and well, that was that.

Check out their Facebook fanpage for the official press release of the bands breakup.

is that britney top-right?
Toy-Toy @ Loaded