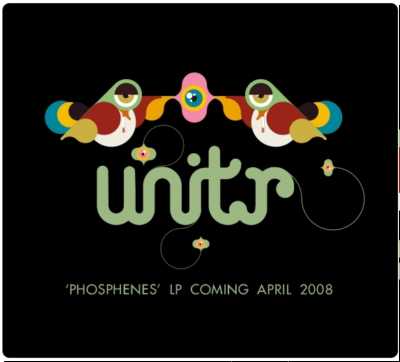 What started off as a creative outlet with no initial intent or plan in place other than making music they love, Unit.r have since developed into one of the tightest and most loved acts in Cape Town. With a real passion for music, fun and the dancefloor, Unit.r’s sound has grown into a kaleidoscope of sonic genres packed into a hugely dynamic 45 minute set.

“We have been playing most of these songs live for some time, and we just had to see how far we could expand them in a different context, without losing the immediacy and energy of the live performance…”

Unit.r have been together for 3 years and have released a 5 track EP titled ‘Two by Four’ and two music videos for the EP tracks, ‘Clap’ and ‘It’s All About’. In November 2007 they made the decision to go into studio for 3 months to record their first full length 11 track album aptly named ‘Phosphenes’, which is what you call the colourful ‘kaleidoscopic’ illusions you see when you close your eyes and press hard on them.

The album is a culmination of 2 years of touring and aims to capture the versatile and highly energised live show. The album design was done by local art hero Kronk (http://www.myspace.com/iamkronk), who undertook to create an intricate look and feel befitting their quirky yet meticulously crafted sound.

“We really wanted to do a record that made us want to dance, but also one that could hold it’s own on the headphones. We had to find a solid balance and maintain a narrative in both contexts, while staying true to the emotions that inspired us in the first place … “

Unit.r have teamed up with their good friends and musical allies Kidofdoom, Yesterday’s Pupil and the Sovereign Academy Dj’s to launch the ‘Phosphenes’ album in Johannesburg and Pretoria and will be bringing down Yesterday’s Pupil (Pretoria based dance-electro producer) to open the launch event in Cape Town.

LEVIS Original Music has come on board to support the tour along with SL magazine and local radical underground fashion label Neon Black.

A limited edition tshirt, product of the collaboration between Unit.r, Kronk and Neon black was produced to celebrate and commemorate the launch of the ‘Phosphenes’ LP…

The tour dates are as follows: