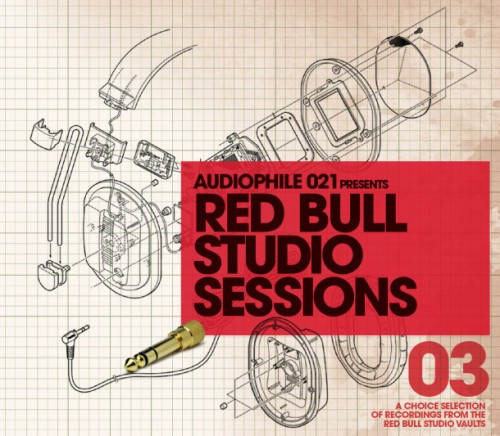 The third installment in the Red Bull Studio Sessions series is a milestone and a testament to the power of great, electronic music in South Africa. Over the Series the Studio has given listeners the opportunity to explore tunes from some of South Africa’s top producers including the likes of Spoek Mathmabo, Gazelle and Mix n Blend as well as showcasing the best rising stars on the scene such as the Ruffest, Das Kapital and O’ltak all of who recorded and produced music in the studio.

The Red Bull Studio Sessions 03 presented and mixed by the Studio’s head sound engineer and very own musical monolith, Audiophile021, is a well-woven audible tapestry of some of the musicians and producers who have come through the corrugated gates of the Studio on the tip of the African continent.

The mix starts out sublimely with Dub-Techno duo, Soft Touch Operation and ebbs progressively along through the Kwaito and Afro-house inspired tracks of DJ MX and Floyd Lavine through the deep murky waters of internationally acclaimed Jullian Gomes. It builds steadily into more dance-floor destroying electro-chargers from the likes of Twelv, a massive Double Adapter Remix of The Wild eyes “Vampire Radio” and offerings from legends such as Sibot and SFR.

Audiophile021 begins to wind down his exploration through Sonics with a more dub-minded look at the Studio’s fruits with his collaboration with 7ft Soundsystem, followed by a gem from aforementioned Das Kapital. He rounds off the mix with a group of multi-instrumentalists in the form of Yesterday’s Pupil link up with Tumi Molekane, Mr. Sakitumi and a taste of the New EP release from Card on Spokes, softly landing us back on Earth with Oltak’s Red Moon.

The Red Bull Studio Sessions 03 follows perfectly in a lineage of mixes steeped in class, pedigree and education for an audience that has become accustom to expect great new music from the Studio.

Alongside its usual slick packaging design, this Red Bull Studio Sessions 03 offering comes complete with a booklet covering the objectives and history of the Studio and it’s counterparts the world over. The Studio network is instrumental in developing, nurturing and showcasing the talent each host city has to offer. It is also a hub for visiting artists from around the world, to find some comfort away from home with the state-of-the-art equipment and laid back, highly competent studio team who are always keen to accommodate and enjoy the company of some of the most exciting international artists including Public Enemy, Dj Craze, Sasha and Steve Aoki to name a few.

The Studio’s main focus is on the public it serves and this is evident through its open-door policy and informative discussion sessions with the international and local guests it welcomes constantly. Previous guests have included Music industry champion Dave Chislett, South Africa House Ambassador Black Coffee and Vinny Da Vinci alongside many others.

With a high emphasis on availability, the Red Bull Studio is plugged into every main facet of the technologically advanced musical landscape through all major internet channels including Facebook, Twitter, Soundcloud and MXit to best ensure everybody is not only afforded the opportunity to expose their sounds to the Studio Team for consideration, but also so that everyone can get a large slice of the magic that is being cooked up everyday.
Red Bull Studio Sessions 03 presented by Audiophile021 by Red Bull Studio CT