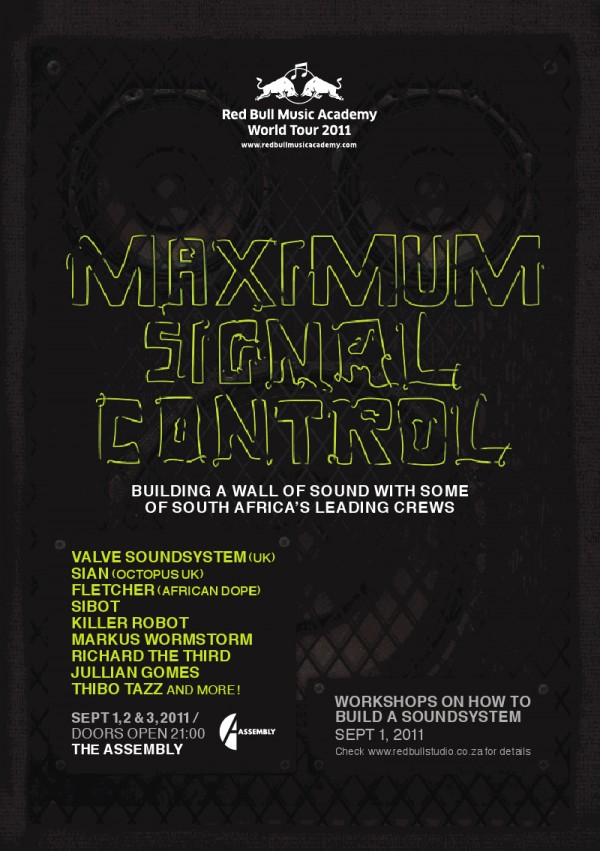 August 23, 2011 (Cape Town) – As the first stop on the 10-city Red Bull Music Academy World Tour, Cape Town will host the creation of a massive sound system from August 29 to September 1.  Under the guidance of Dillinja and K-aze – the visionaries behind the world-famous Valve Sound System (UK) – and SIAN, DJ and founder of Octopus recordings (UK); some of South Africa’s most prolific crews, DJs, promoters, producers and creative collectives will be part of the build. As a tribute to the nucleus of club culture, the sound system will then travel to some of the country’s largest musical events.

As the creators of the legendary 96K Valve Sound System – the world’s first sound system designed and built specifically for drum ‘n bass – Dillinja and K-aze are versatile producers and mix masters. Since the mid 1990s, the duo has had a massive influence on drum ‘n bass and dance music in general, having championed the first filtering drums technique, distorted basslines and unique Amen breakbeat patterns. With an otherworldly and hypnotic take on techno, SIAN is globally respected for his avant-garde approach to club culture and his trademark experimental DJ-ing style.

When completed, the collaborative construction of the world-class system will be capped off by a three-day festival of sound. Taking place at The Assembly in Cape Town, September 1-3, it will feature a full spectrum of electronic music where all participating local crews will have the opportunity to perform on the newly built system alongside world-renowned selectors.

In advance of the Red Bull Music Academy in Madrid – running October 23 to November 4 and November 13 to November 25 – events will be being held in Berlin, Cape Town, Detroit, London, Melbourne, New York, Paris, Rome, São Paulo and Toronto as part of a global exploration of some of the most crucial musical movements. Each stop will delve into unique elements of the Red Bull Music Academy experience, bringing together influential musicians from various corners of the world across different eras of music to pay tribute to the pioneering sounds that paved the way for today’s deepest funk and hip hop.  To learn more about each stop on the World Tour, visit www.redbullmusicacademy.com.