Posted on January 26 2011
by dirtyoldman 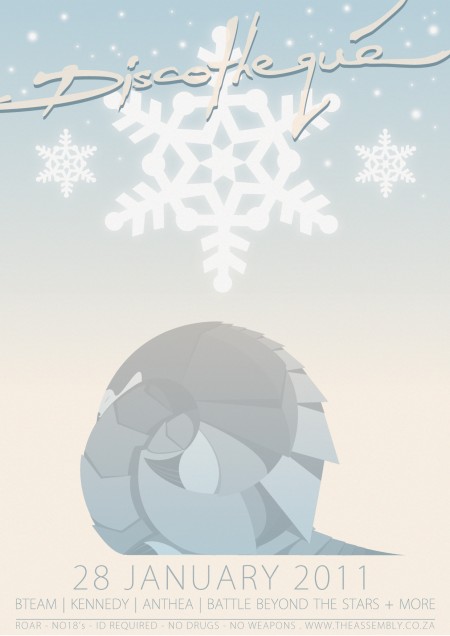 Discotheque is going to massive this Friday featuring Bteam, Kennedy, Anthea, Battle Beyond the Stars and more! We have a pair of tickets to give away. All you need to do is mail us freeshit@electrotrash.co.za and name one of the DJs playing on the night. Competition closes 27 Jan 23:59 CAT. Read on below to get a taste of what to expect!

B-Team define their sound as a blend of Experimental/Fusion/Lyrical music. Their tracks feature strained synths emitting strange sounds to create the backdrop for topic rhymes. Kennedy meanwhile covers the more playful Electro/Indie side of Electronica, while at times taking it to the harder side of the genres.

Technophiles will love the Minimal/Techno/Tech House layed down by Anthea Scholtz.  Check out her most recent mix on her Soundcloud page and give a listen to her mix recorded at Red Bull Studio in April below.

DJ and Producer Battle Beyond the Stars will be dropping his “unique blend of Electro, French House and unusual tracks from the last 3 decades”. His sound is really unusual and interresting, with a  bite of nostalgia. Check out more of his tracks over at Soundcloud:

Cold by Battle Beyond the Stars

Polygon Palace gets the Popskarr treatment!
Free Tickets for the DOGBOX Foam Party!!!!!