Posted on August 5 2010
by Richard the Third 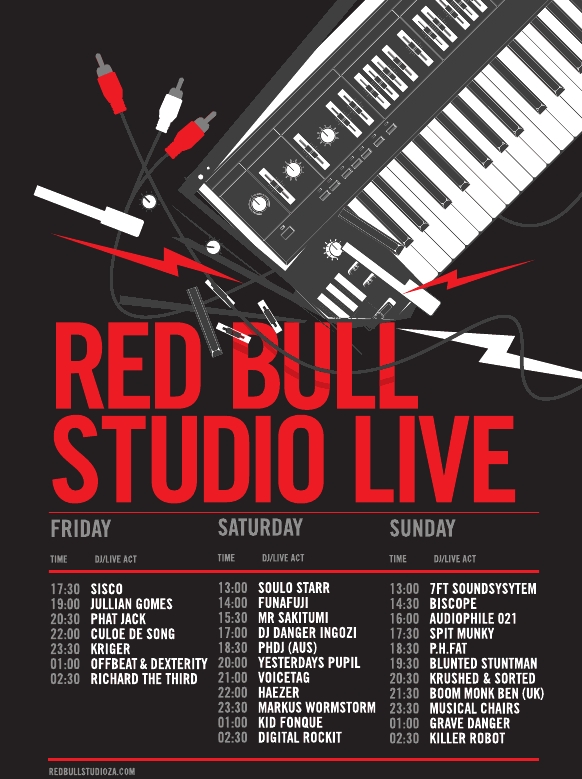 Riding on the shock wave success of the Red Bull Studio Live stage at Cape Town’s Rocking the Daisies last year, this year the Red Bull Studio in Cape Town is hosting the Sipho Gumede stage at Oppikoppi’s Sexy. Crooked. Teeth festival from the 6-8 August and will be proudly showing off some of the best DJs and live electronica acts to come out of South Africa over the past years.

From the rave-against-the-machine electro punk of Haezer to the pimping thug techno of Marcus Wormstorm to the bashing pedigree breaks of the Blunted Stuntsman to the wall of soul sounds of Culoe De Song, all bases and basslines are covered when it comes to keeping the dancefloor alive with kinetic rapture.

On the flip, the stage will also be host to some of the most trail-blazing local live electronica. Acts such as Krushed and Sorted, Mr. Sakitumi, 7ft. Soundsystem and Biscope will be bringing all manner of music machinery and live instruments on stage to deliver razor cutting edged sonics and visuals.

From the line-up to the sound to the lights and AV, the entire stage stage will be curated by Red Bull Studio in collaboration with the Oppikoppi team and from Friday to Sunday will showcase the full spectrum of genres and artists that are being cultivated and making noise in South Africa right now. Downbeat dub, uprocking sensual house, twisted electric funk and smashing dancefloor hedonism: From the 6th to 8th, no musical stone will be left unturned.

Take a listen to this fresh glitch-hopping grinder from Voicetag who will be playing the 21:00 timeslot on Saturday opening for Haezer.