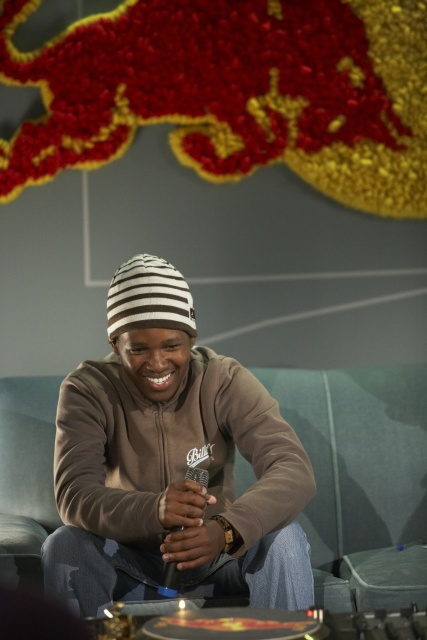 Music Created At The Red Bull Music Academy in London

It’s one thing to bond with someone who uses the same software. But it’s another to share a studio with a drummer who builds instruments out of tin cans, an analog funk apostle let loose on digital synths for the first time, a budding Brazilian bossa nova composer or a Grammy-nominated anti-pop singer from Mexico. The thirteenth edition of the Red Bull Music Academy in London saw an incredibly diverse musical output. The resulting sampler, Various Assets – Not For Sale 2010, pays testament to a once-in-a-lifetime set of musical circumstances: collaborations between people who’d never met before, but who found contrasting keys next to Tower Bridge.

The sixth in a yearly series, this double CD is not for sale, but is instead sent out to all the musicians who’ve ever been a part of the Academy, as well as music lovers in 32 countries. The comp is a snapshot of what goes on in the Academy studios – and also provides a unique window into diverse scenes & sounds from the places these musicians hail from.

For the two South African participants who attended the Academy in London, the young urban house ambassadors DJ MP6-60 and Jullian Gomez, Various Assets – Not For Sale 2010 is an amazing showcase of not only their brilliant musicality but also their ability to collaborate with the best in their field. Both artists had the opportunity to work with the extraordinary Robin Hannibal whose rich, future-soul released on acclaimed labels like Ubiquity, has received wide-spread praise. “I Need Your Love” by Robin Hannibal and Jullian Gomes fuses the stylised sounds of house and techno with the classic feel and groove of soul  music with ease while “Rocking All Night” by Master MP6-60 and Robin Hannibal imagines a world of low-slung synthadelic funk ruled by George Clinton and Dr. Dre.

Ultimately, this compilation is a freeform expression of music celebrated and pulled apart in sleepless studio time. Collaborations between like-minded folks, with the excitement of what tomorrow might bring.

Various Assets – Not For Sale 2010 is available for download on www.redbullmusicacademy. (click here to read the post) CD copies can be picked up at record stores and clubs, music festivals and local Academy sessions worldwide. The application phase for the next edition of the Red Bull Music Academy in Tokyo will kick off in early 2011.

Free Album: Jacob Israel – “This Too Will Pass”
MTKIDU: Key To Download Scar Do!