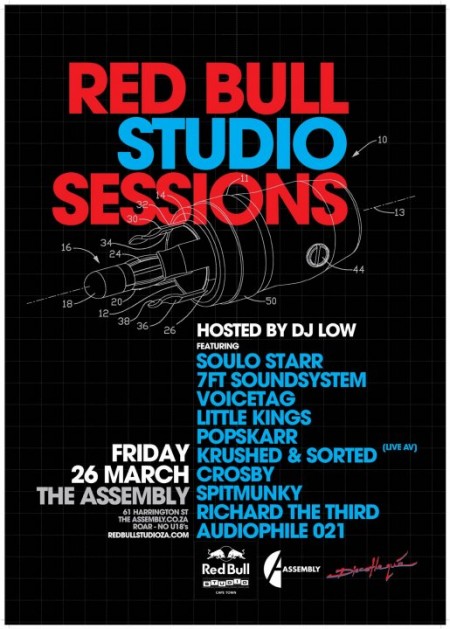 “The Red Bull Studio Sessions” presented by DJ Low is a DJ mix featuring some of the best music to be made at the Red Bull Music Studio in Cape Town. It is the culmination of two years of trial and error in making the studio what it is today: a space that attempts to cultivate some of the best local music.

From the head-rocking sounds of the Little Kings, Popskarr and the Plastics, the glitch-hop infused beats of P.H.fat, Chamber Concept and Spit Munky, the soulful excursions of Fifi, Soulo Starr and Erefaan Pearce, the rumbling dubstep of Biscope and Fletcher, the slamming dancefloor techno of Grave Danger, Mervin Granger and Thibo Tazz and the unshakably catchy South African house of Audiophile 021 and DJ MX, the mix is a reflection of some of the best musical styles being brewed up in South Africa at present.

A lot of the music was made during a Third World Perspective, essentially a taste of what the famed international Red Bull Academy is like. For three days and nights, 20 music makers from around South Africa, covering all styles and genres, spent their days being lectured by international music giants such as Trevor Jackson alongside local music titans such as Sipho “Hotstix” Mabusa. But it was at night where the creativity came alive, as the participants got stuck into pooling their talents to make music.

Much of the live music on the Studio Sessions CD was recorded as the part of the RADAR project. Standing for Research-Assist-Develop-Acquire-Release, RADAR is an initiative aimed at providing up and coming bands with a space to record their music either as a demo or as an official release.

Some of the music wasn’t even completed at the Red Bull Studio. Rather artists popped in to use some of the gear and take the sounds home to complete the tracks in a space they’re more comfortable with.
To launch the CD and to commemorate two years of whirlwind creativity, the Red Bull Studio in conjunction with the Assembly, Cape Town’s premier music venue, will be hosting a meteoric line-up of artists, acts and DJs all of which have featured at The Red Bull Studio.

To have a listen or to download the actual Red Bull Studio Session as a DJ mix, check out the Soundcloud player below: