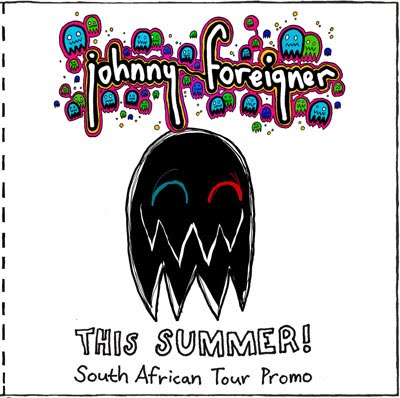 Some of you may have heard that Johnny Foreigner will be touring South Africa this year. While this UK indie rock band may be pretty far removed from electronic music we still though it would be rad to promote it a bit here. Griet are bringing them into the country and they represent a couple of the artists on electrotrash so yeah, spread the love!

They have put together a promo sampler for you to download, along with album art that you can print out to make a complete package! Grab it below!

Have a look at the pr0mo video below as well as read the press release after the jump!

GRIET is bringing their 1st ever international band to South Africa to come and party, HARD! Johnny Foreigner are from the UK and are one of the most anticipated emerging acts for 2010! We are incredibly lucky to get them here, but a bribe to show them our wildthings in the Kruger Park seemed enough reason for them to come…

To put things in to perspective, their album is produced by the same guy (Alex Newport) who produces Death Cab, Rival Schools, At the Drive In, and The Mars Volta. Their 2008 debut album ‘Waited Up Til It Was Light’ was a major blog phenomenon and catapulted them onto the desk tops of some big-wig music bizz types…now they are signed to a fancy New York Record label ‘Best Before Records’ and have played shows like T-In the park, Reading, Leeds Fest, SXSW, Summersonic (Japan), Offset and Sugarhill festival. And they headlined tours with the likes of The Futureheads, Idlewild, the Young Knives and Forward Russia!

We will give you more info closer to the time, but what we can tell you for now, is that these shows are going to be the BIZZLE! and we hope to have as much of your support as possible in promoting the tour. The show dates are as follows:

Venues still to be announced.

So yeah, check out more from the band at their website here, their South African Tour Facebook page here and read what Ben had to say on his blog here!