Posted on November 20 2009
by Richard the Third 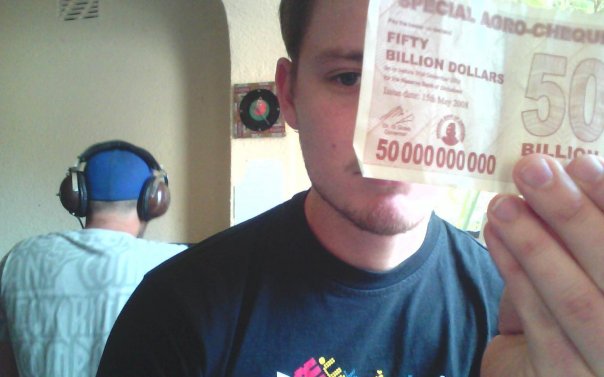 With Mujava taking the dance world by storm last year, there is a peeked interest in local SA dance-floor electronica. Lots of things are happening for local electro producers. In fact you should read this piece already written by Ol Dirty Man, about Gazelle’s Bloody Beetroot collab and a general encouraging message for local musical electricians.

The Red Bull Studio roundup for this week introduces a new act to the scene and hopefully a new Electrotrash artist (and they’d be perfect for the site). Zim Dollar Bill is comprised of two prolific Cape-Tonians, Naartjie and Liver (who already have several other side projects). They make pounding, pulsing, poes-hard electro. But there’s an African flavour in there as well, mainly in the rhythm. Off-beat snares and claps follow the tried and tested local house music syncopated drum sound, only rather than being set to mellow chords, they fight for space with dirty, filthy synths.

One of the synths used was the Moog Little Phatty, which is the main reason these guys came into the Red Bull Studios: to abuse our favourite little synth. My only contribution to this project was to set up the Phatty’s output through a side-chain compressor in Abelton, lock the studio doors and come back in several hours to see what the dastardly duo had come up with. You really need to hear for yourself by checking out their Soundcloud page:

The RBMA Radio mix for this post comes from Djedjotronic. He is honestly my favourite producer on Boys Noize records right now, even more than the mighty Alex Rider himself. Djedjotronic’s style of music has been described as Ghetto-Tech. It’s a brilliant concoction of the electro sound that Boys Noize has made famous mixed up with cut up rap, afro-style syncopated rhythms and huge doses of ‘rave’ (trust me it works). His collaborations with Spoek Mathambo have yielded one of the best records of the year, the mammoth “Dirty & Hard”. Listen to this live mix at the Pantiero Stage in Cannes: