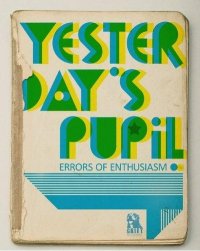 Listening to ‘Errors of Enthusiasm’ one gets the impression that there is a major influence is derived from Rock (and perhaps even a bit of Roll). This is conveyed through the use of live drums in the recording of the tracks along with the electronic drums adding to the overall beat rather than forming the main focus. Another strong element in the music is guitar which can be heard in many of the tracks on this album including the opening track ‘Mechanism of the Universe’, ‘Roll under Milk Wood’ and ‘The Perfectionist’.

Some of the more synth driven, electronic tracks such as ‘Supercilious’, ‘A Quiet Separation’ and ‘Ag Club (An Unconscious Celebration)’ seem to have more of a down-tempo feel to them. The vocals on this album are drawn out and have an ethereal feel to them, which gives many of the tracks an almost ballad like quality. ‘You’ll Poly Die!’ and the first single off the album ‘Lines and Colours’ have a more electro-pop like quality to them which adds to the overall diversity of the album. It’s a pity that ‘Lines and Colours’ is not getting the airplay it deserves simply because of a cocaine reference.

Overall this album is as diverse as it is well-rounded. Yesterday’s Pupil has a sound that is entirely his own and yet is strangely familiar. Capturing the energy of his live shows is no easy feat and while nothing can ever compare to seeing an artist live on stage, this album does deliver. For those that have seen his live show, this album will not disappoint, while those unfamiliar with his music and who crave electronic music with something a little different will no doubt enjoy it as well.

While we don’t have any of his tracks for you to sample you can get the Haezer remix of ‘You’ll Poly Die’ in our Downloads section and you can watch the music video for ‘Lines and Colours’ here.