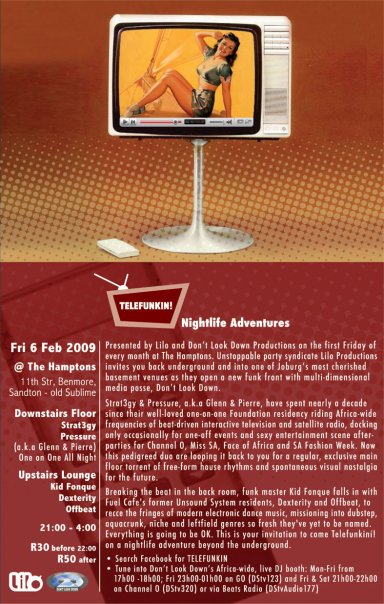 TELEFUNKIN’!
Nightlife Adventures
presented by Lilo and Don’t Look Down
on the first Friday of every month at The Hamptons.

Unstoppable party syndicate Lilo Productions invites you back underground and into one of Joburg’s most cherished basement venues to open a new funk front with multi-dimensional media posse, Don’t Look Down.

Strat3gy & Pressure, a.k.a. Glenn & Pierre have spent nearly a decade since their well-loved one on one Foundation residency riding Africa-wide frequencies of beat driven interactive television and satellite radio, docking only occasionally for one off events and sexy entertainment scene after-parties for Channel O, Miss SA, Face of Africa and SA Fashion Week. Now this pedigreed duo are looping it back to you for a regular, exclusive main floor torrent of free form house rhythms and spontaneous visual nostalgia for the future.

Breaking the beat in the back room, funk master Kid Fonque falls in with Fuel Cafe’s former Unsound System residents, Dexterity and Offbeat, to recce the fringes of modern electronic dance music, missioning into dubstep, aquacrunk, niche and some leftfield genres so fresh they’ve yet to be named.

Everything is going to be OK. This is your invitation to come Telefunkin’! – on a nightlife adventure beyond the underground.