Third World From The Sun Review

Posted on December 9 2008
by dirtyoldman 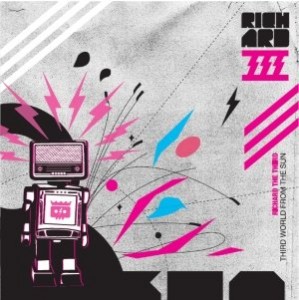 As mentioned in our previous post, Richard the Third has released his debut album entitled Third World from the Sun. The album contains previously released tracks as well as brand new ones. Read the full review after the jump!

The track How can you tell? featuring Bride Reunion is the number one downloaded track here. You may have also heard Flux Capacitor on his MySpace page, which is one of my favourite songs on the album. It has the feel of New Order with a 2008 twist. Dancing with the DJs girl which features the vocals of Shane from Desmond and the Tutus is his most recently released track and is also available for download on our site. It features that deep squelchy bass that we love so much and should be a big hit this summer with the party kids!

The album starts hard and winds down to more chilled out electronica. It is just under 44 minutes long which I consider to be the perfect length for an album. Blast em into orbit is another great track which features samples of speech on electronic music from what I can tell. What I also like is that he has collaborated with a number of other artists such as Themba January on Soul Trader and Michelle Freeman on Haunt.

The album is an amazing journey from the dance floor to your car on your way home at 4am. Richard the Third has produced something awesome and the fact that he is offering it to anybody who asks is great! All I can say is go out and get this album. You will not be disappointed. In the mean time check out our downloads section to get a taste of what to expect!

How To Have Fun When You Hold My Sampler While I Kiss Your Girlfriend!
Haezer – Sirens In The Night Video