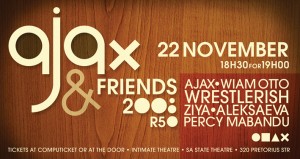 Where: State Theatre (Intimate Theatre), Pretoria
Cost: R50 (THERE ARE ONLY 120 SEATS AVAILABLE IN THE THEATRE, FIRST COME FIRST SERVE, THE SHOW IS ALREADY BOOKABLE AT COMPUTICKET.)

“Ajax and Friends 2008″ will be held at the State Theatre (Intimate Theatre) on 22 November. The show, which was hosted at the same beautiful venue in 2006 and 2007, consists of a number of reasonably underground artists, songwriters, musicians and poets all performing unplugged, raw and intimate sets to a seated audience. It is a small matter of interest that all the artists featured over the 3 years are
either currently living and working in, or were born and raised in the great snor-city of Pretoria. The show boasts past unplugged contributions from such diverse artists as SHU, Desmond and the Tutus, Spitizen, Wiam Otto and the Flowing Water Band, Jacob Israel, Tamith Hattingh, Rhinoshirt and a number of other young eccentrics.

THERE WILL BE MERCH ON SALE.

WIAM OTTO, frontman of the Flowing Water Band, performing his folk/rock/afro-jazz classics solo. It has been remarked, in Ajax’s presence, that when Wiam plays the guitar it sounds like six different people playing at the same time. Come and judge for yourself.

WRESTLERISH, also known as Werner Olckers, previously SHU’s frontman, performing a beautiful set of his own well-crafted songs in their original acoustic form. Werner’s voice has won and broken many hearts, add yours to that list.

ZIYA, known previously as Jana, has just released her second album. This will be one of the first performances of some of her new material, a mature and eclectic mix of social commentary and unmatched musical skill.

PERCY MABANDU is a well-established DJ on TUT’s Top Stereo, hosting a spoken word/poetry show/movement called “the Black Star Line”. Percy will be delivering some of his own spoken word compositions at this year’s show.

ALEKSAEVA (also known as Ola Kobak) will be performing a set of her own pretty electro-pop/acoustic songs with the unstoppable Corne Roodt on guitars and Speedy Kobak on trombone, backed by the genius of Jacob Israel.

Naturally, the guy who puts the “Ajax” in “Ajax and Friends” will be hosting the show, interlacing some collaborations with some of his own poetry and songs.

Please visit the blog (www.ajaxandfriends.blogspot.com) and click on their names to view some of their other work. The flyer was designed by Louis Minnaar.