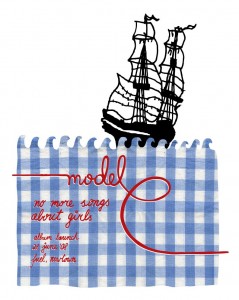 Model c started as a collaborative project between Kidu and his sister Robyn in 2006. They wanted to work on a project together, coming from very different artistic backgrounds; our diaries became our main source of inspiration and linked us together. Our only boundary or rule for this project was we had to be honest. We would come together once a week to shares our dairy entries and develop them into lyrics. Kidu  would compose simple songs around the lyrics. Kidu taught his sister to sing and master the melodica and sampler. They would then sit in the their old domestic helpers room and perform their music till the early hours of the morning, it made them both very happy.

Robyn is currently living in Cape Town and obtaining her masters in Fine art. Robyn still shares her diary entries with Kidu and will be joining us for the launch in Joburg.

Kidu is a freelance flash animator, illustrator and sound designer working in Joburg. He is currently working on a new album with his other project MtKidu and also performs in Doris with Rob Mclennan. Alex Hing(keys, vocals) and leighton Powell(drums) are new members of Model C and have been hard at
work, practicing some new songs for the second installment of the model c project.

Model C have finished all the recordings and mastering for our first album “no more songs about girls”. We will be doing a launch performance with the full band in Joburg at Fuel Cafe on the 28 June for the legendary Lilo parties. A limited run of 200 albums will be released and on sale on the night designed by Jelena Jovanovic…
If you want to contact us to book us or purchase an album… email Model C on kiduster@gmail.com!