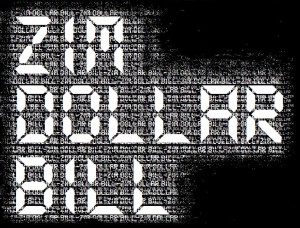 Zim Dollar Bill After many beers and a few other things Narch (PH Fat) and Liver (dankliver) decided to embark on a dynamic dancefloor killing spree. Initially set up as a pilot programme for whale communication, but after being shut down due to a large outcry from the public that linked “Zim Dollar Bill” to the beached whales incident of Kommetjie main beach 2009, the two founding members decided to try the same to humans. A LIVE electronic movement set to turn heads beyond breaking point. We’re putting value back in the Zimbabwean currency…; Narch likes apples and Liver likes beer…