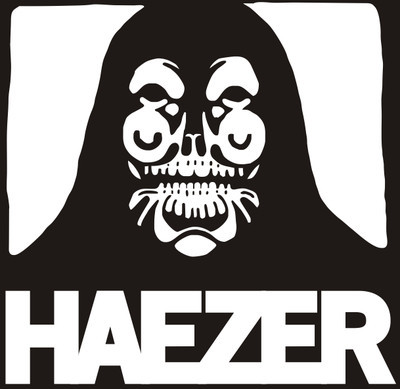 HAEZER originates from Cape Town, South Africa and had been producing his signature trash/electro sound since late 2008. He began his live career at THE ASSEMBLY, opening for visiting internationals such as Steve Aoki, Gtronic, Djedjotronic and Le Castle Vania. Soon after, HAEZER teamed up with Cyberpunkers (ITALY) and Saint Pauli (GERMANY) to collaborate on his debut single Who The Fuck is HAEZER (released on Freakz me Out Records, GERMANY) and later on touring together with Cyberpunkers on their 2010 SA tour. The Toxic Avenger met up with HAEZER on his 2009 tour to South Africa, a meeting that later resulted in HAEZER being invited to remix his new single N’importe Comment featuring Orelsan, recently released on ROY Records (FRANCE).

His single “Who the Fuck is HAEZER” featuring CIRCE was released in JUNE 2010 and features remixes by Cyberpunkers (Italy), Saint Pauli (Germany), Deadbots (Ireland), Belzebass (Italy), Geht’s Nog (Germany), Noise Generation (Germany) and Trump Disco (Australia). The Cyberpunkers remix made it to number 5 in the top 100 on Beatports dance chart.
In MAY 2010 HAEZER toured EUROPE to promote the launch of the single where he played with Midnight Juggernauts and Holy Fuck at Paradiso in Amsterdam and at the “SO NOT BERLIN” party at CRUX Club in Munich, he also played shows in Italy (with Congorock, Tom Deluxx, Belzebass and Pelussje) as well as Switzerland, Germany, Poland and Holland.
In July 2010 HAEZER toured Australia with Gtronic (Dim Mak) as part of the promotional “WE LOVE NOIZE” tour for Tuff Em Up! Records, also behind the legendary TRASHBAGS parties. HAEZER headlined alongside Gtronic across the country playing 6 major cities and is due back in FEBRUARY 2011 for a follow up tour.

HAEZER has recently had his EP “DOMINATOR feat. CIRCE” signed by ONION RECORDS (ITALY) with remixes by IKKI, Boomzers, Krftkds, Snap Crack and Black Dove Underground, due for exclusive release on the 2nd of OCT, to BEATPORT worldwide.
To date HAEZER has headlined at most major local festivals such as Oppikoppi, Earthdance, Rocking the Daisies and Synergy and can be seen on a regular basis at the Assembly’s Discotheque massively popular electro dance parties. He has also recently started his own party with DJ/Producer Markus Wormstorm (SWEAT-X) called GARDEN BOYS, held monthly at FICTION in Cape Town.