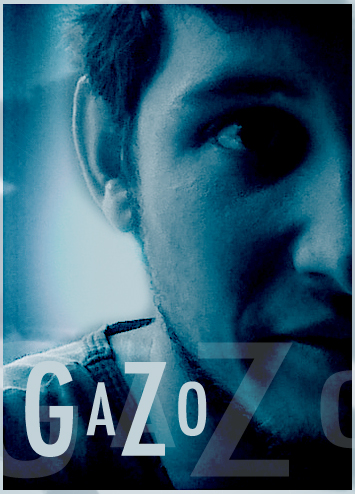 GaZo is a solo artist who began as many as an aspiring rock musician. Although starting out as a rock enthusiast, GaZo has grown as an artist and branched into many different genre’s through his influence into the computer music domain. GaZo’s musical influences range from Electronica virtuoso’s as BT, the Postal Service, Imogen Heap; to Rock icons as Incubus, Foo Fighters, 311; and even Hollywood musical composers Hans Zimmer and Danny Elfman.

GaZo’s music can include anything from soft acoustic instrumentals, to glitchy IDM electronic dance-pieces, all the way through to orchestral film-score pieces, and anything in between. Through bringing in all these different elements there is a coherenece to his sound in the style of beats, to the melody and harmonies used, no matter the genre.

GaZo is busy building up his reputation as a passionate computer music enthusiast, but feels that the technology should not drive you to a specific genre. All music in the end of the day is music. What is important to GaZo is the importance of melody, harmony, songwriting, and the intertwining of it all. GaZo invites you into his music realm and keeps you listening. His experimentation and manipulation of sound and music is both interesting and intriguing. GaZo is busy working on his debut album, Shoegazer. One should expect the release in the beginning of 2009.