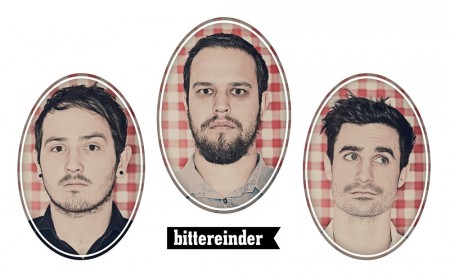 It seems that the unpredictable city of Pretoria is responsible for much greater controversy and magic realism in recent years than many citizens of the world might have guessed. Take bittereinder for instance. Three relatively good-looking young Pretorian men who have unimaginably overcome their respective quarter-life crises to produce a series of works that verges on the magnificent and borders on being inexcusably ridiculous. Bittereinder’s music rubs noses with the language that you speak at home, massages the shoulders of your favourite book, and French kisses your ideas about God.
In 2007 Jaco penned his first Afrikaans rap verse, and Peach and Louis immediately knew what to do. Taking their cue from years of experience in what may politely be referred to as “the industry”, the three young men forged a landscape of Rhythm And Poetry that was as daring as it was truthful, as hysterical as it was ambiguous, and as South African as it was hopeful. There was only one name for it. Bittereinder.